How to Build an Android App

How to build an Android app

Learning something new can be daunting, and it’s no different when it comes to new technologies. Luckily, this doesn’t have to be the case when it comes to Android app development, especially when you build your mobile app with Realm .

What you should know already

In this article, we learn how to build our first Android app in a few simple steps. This tutorial does not require any previous development experience. Without further ado, let's start.

Development with any technology needs certain prerequisite software and tools and the same applies to Android. Android development is primarily based on Android SDK and its build tools, which are used by all Android apps to build and access platform API. In addition to this, an IDE is required to aid development activities.

Installing each of them individually and working them together can be a daunting task, but luckily, Android has bundled all this software together in one software called Android Studio . So let’s download and install the Android Studio.

Step 2: Getting on to the basics

Before getting our hands dirty, let's cover a few basic things.

Building a “Hello World” application is the quickest way to understand and implement the basics.

We have now successfully created our first Android project from the template. Now, let's understand the project structure and its contents. 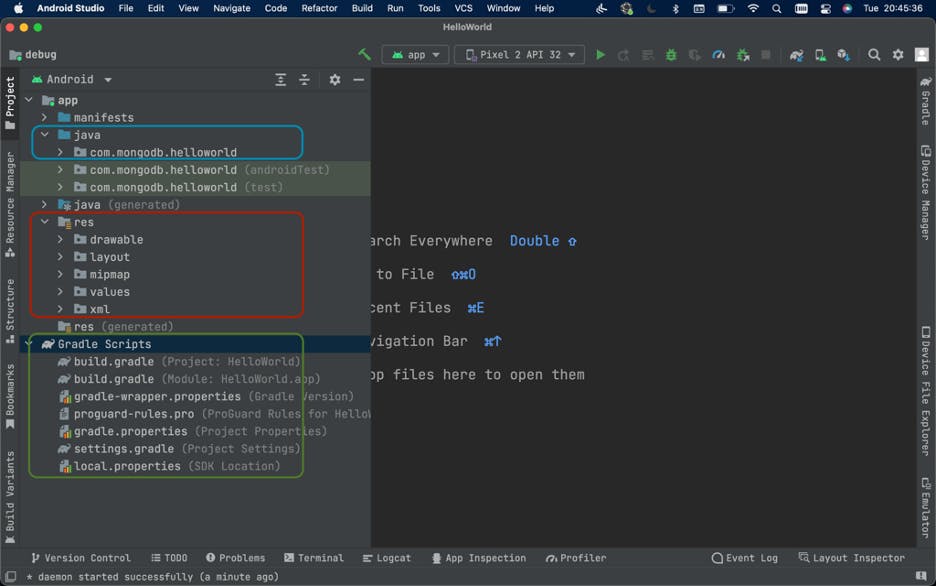 First block: Blue contains activities and other Kotlin files, and it’s responsible for rendering our layout from files created in the second block.

Second block: Red contains all resource files—like images, icon assets, etc.—which are used in the layouts file placed under the layout folder. You can think of the layout file as a blueprint of how the screen has been rendered on UI. And the last block: Green contains all the configuration information, like the minimum supported Android OS version, app version, etc. Now, let’s review our activity file, MainActivity.kt, which is the brain of our application. 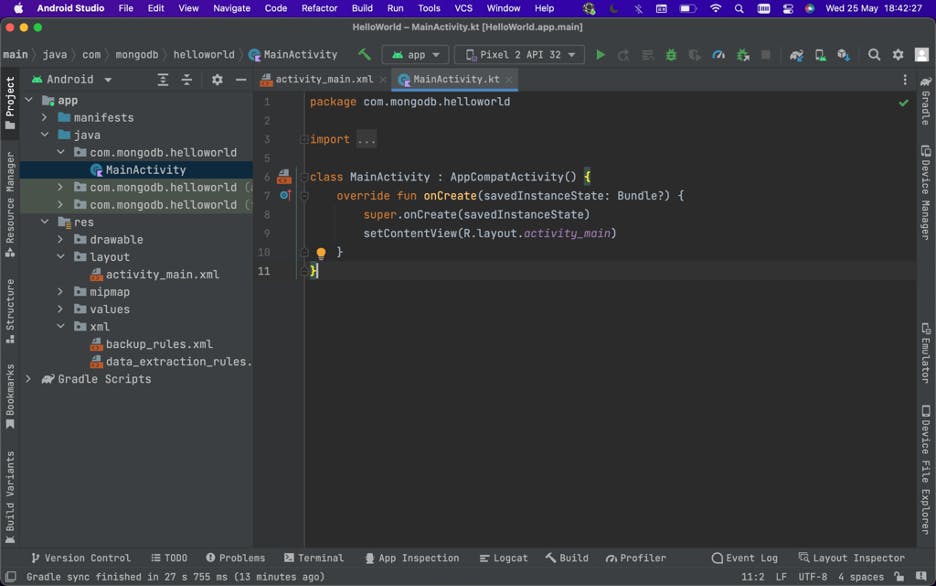 Currently, this code is very simple—it renders the layout, activity_main.xml, onto the screen.

The next step is to run the project. For this, we need a device in which to install and run our app. Let’s create a virtual one!

We are all set now. Let’s run our project by pressing the play button that will run the app in the emulator we just created.

Good job! You just launched your first Android app with a few clicks.

Step 4: From newbie to professional

Let's take our application to the next level and personalize it. Next, we’ll update our screen to take an input from the user and display it back on the screen.

With this, we are all set to access the EditText value and display it on TextView. Below is the updated snippet of MainActivity. It’s ready to run. 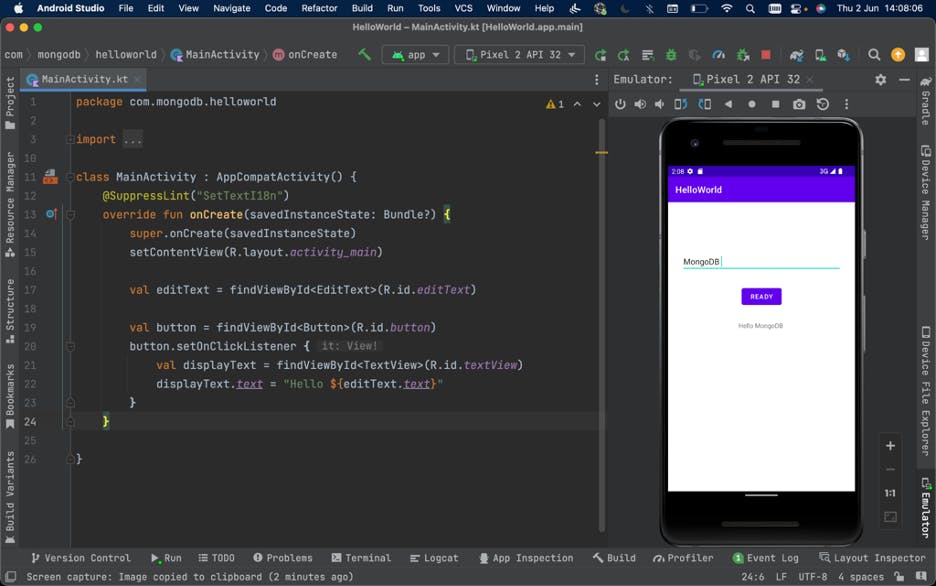 You have now covered the basics of Android app development and are all set to create more sophisticated apps. As a next step, learn how to save your data on your device and share that data across devices by connecting it to the cloud.

What are the top five Android app development languages?

What is the easiest way to develop Android apps?

There is no easy or hard way to create apps—each comes with its own tradeoffs. However, the most common starting point is Android’s official Android Studio . Then, when it comes to managing your data and the back end, Realm and Atlas Device Sync by MongoDB were designed to make your experience as a developer super easy, so you can focus on creating high quality apps very quickly. Give it a try!

Which is the best platform to develop Android apps?

Android app development can be done quickly using Android Studio , which is the official platform for Android development .

What is the difference between native application development and hybrid?

This is a very common term you’ll come across many times as an app developer. In very simple terms, if any app is built using the tools and language recommended by the platform, it qualifies as a native app.

Another common differentiator between the two is whether a single code is used to build mobile apps for different mobile platforms like Android and iOS. But an exception to this is apps built using the Kotlin Multiplatform app.

Getting started with Device Sync

Deploy an iOS, Android, or cross-platform “To Do” app with real-time sync in minutes.